Role of parsing in computing

Data processing is a pillar of computing. To run an algorithm, one must first build up some data structures in memory. The way to populate data structures is to get some raw data and load it into memory. Data scientists work with raw data, clean it and create well-formatted data sets. Programming language designers tokenise source code files and then parse those into abstract syntax trees. Web-scraper author navigates scraped HTML and extracts values of interest.

Informally, each of these steps can be called "parsing". This post talks about how to do complete, composable and correct parsing in anger. What do we mean by this?

So how do we achieve it? Let's first talk about how to not do it.

Thanks to the popularity of now perished Perl programming language, a whole generation of computer programmers was making futile attempts to parse non-regular languages with regular expressions. Regular expressions are no more than encodings of finite-state automata. 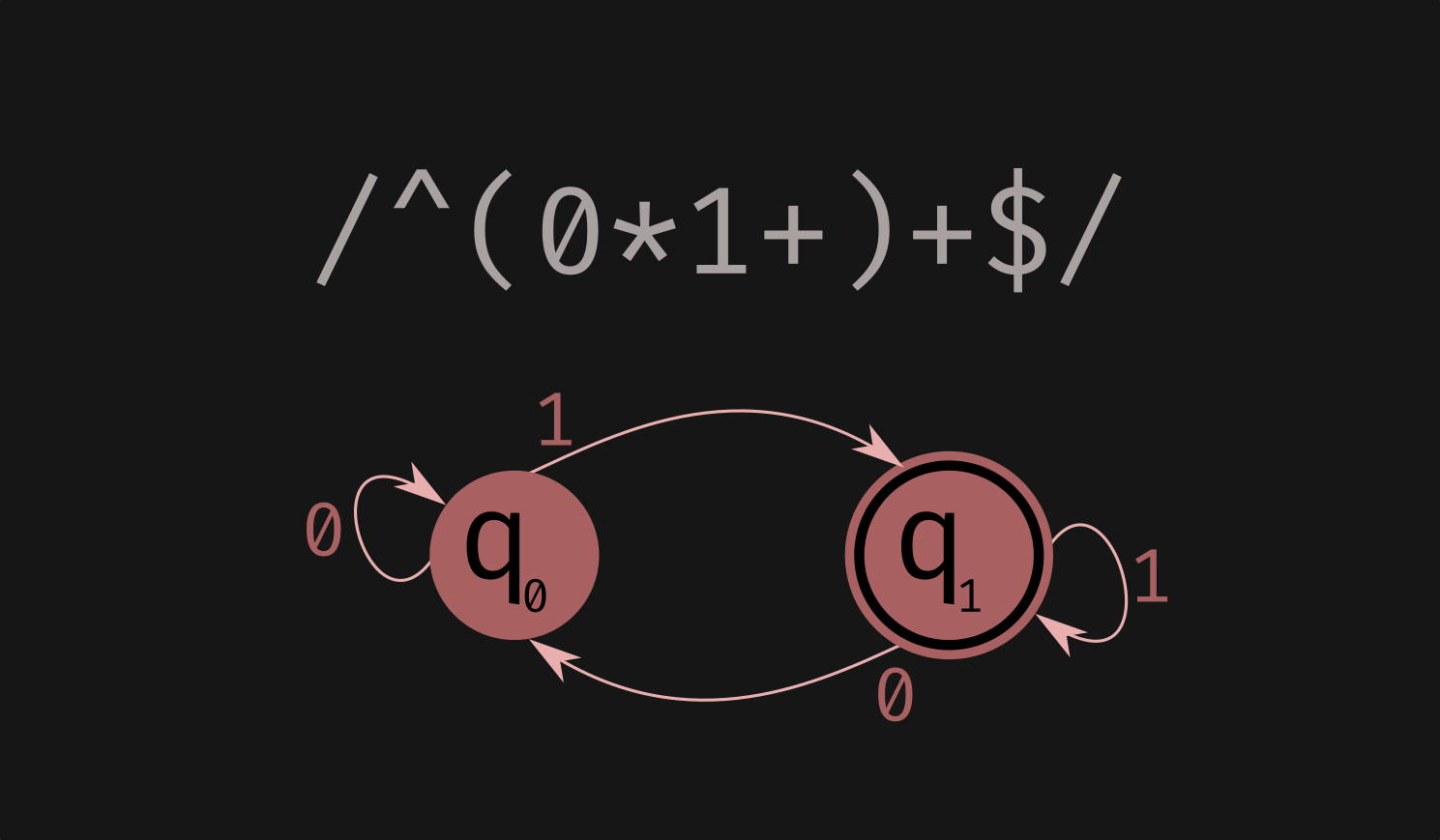 Non-deterministic finite-state automata can rather elegantly accept many non-trivial languages. Classical example is that no regular expression exists that accepts strings of form "ab", "aabb", "aaabbb", ... Equivalently, one can't solve the matching parentheses problem with a regular expression. The simplest stack machine is needed for that. 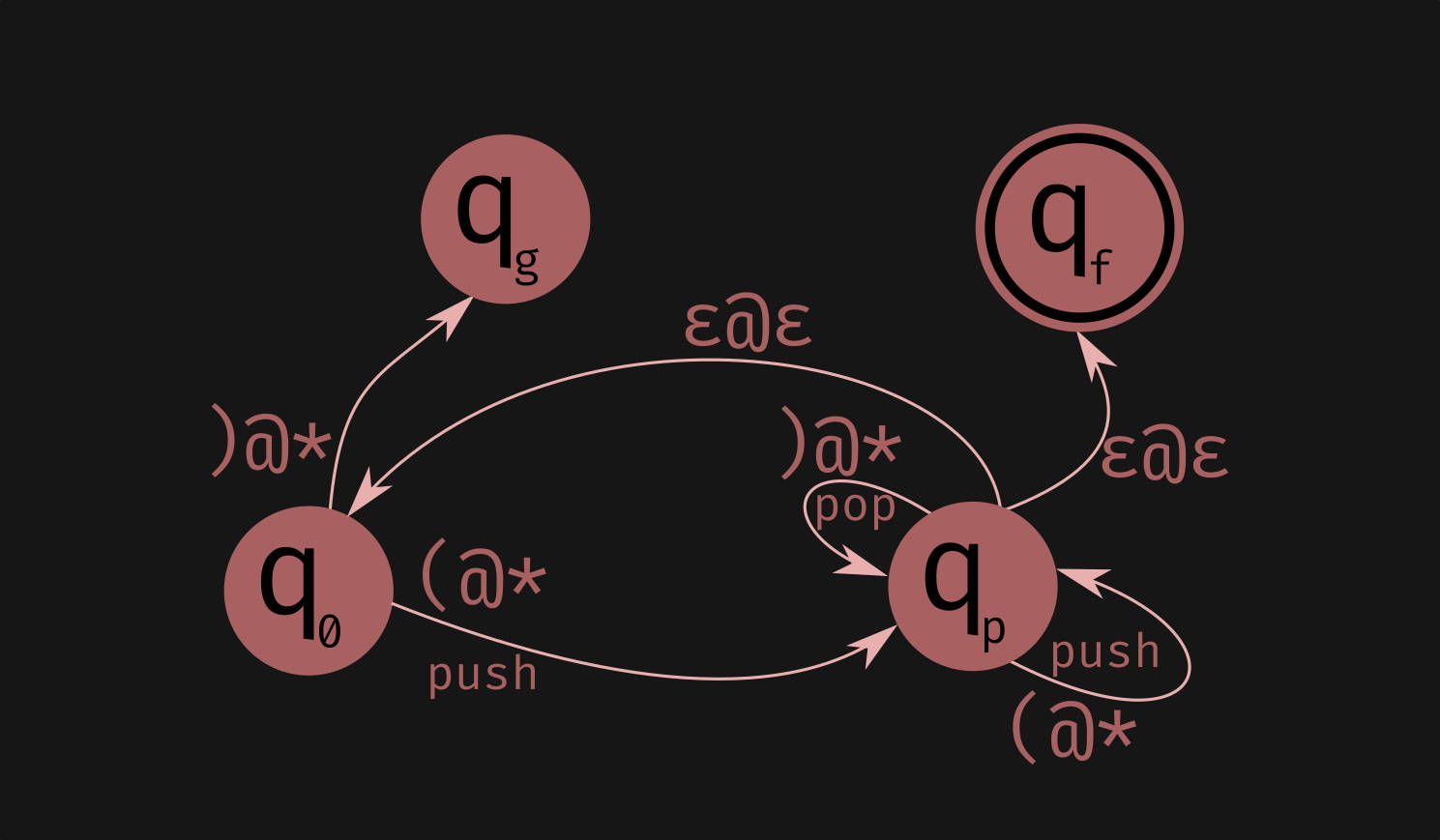 Stack automaton can be in several states at once. A state with no transitions "fizzles" on any input. (@\* matches character '(' with any stack state. ε@ε matches instantaneously as the automaton gets to state p, but only if the stack is empty. The best introductory book for those interested in formal languages.

Thus, regular expressions are nowhere close to providing enough facilities to work with context-free grammars. But they may be sufficiently powerful to clean data or extract some values, so why are we saying you shouldn't use them ever? Practicality reasons!

Let's take an example from some Regex Cookbook post (medium-paywalled link). This way we know it's an actual approach used in the industry. Here is one of the regular expressions author offers:

Many can superficially understand what is going on here. This regex seemingly has something to do with links, but even when we resort to automated explanation, things don't get much clearer. Well, according to the author, this regex is supposed to detect "defanged" URLs. Now let's see all ways in which it and any other sufficiently large regular expression fail.

Regular expressions have intrinsic problems. To us, it means that only short expressions should be used. The author uses them exclusively with grep, find, and vim.

These days, gladly, a better parsing methodology becomes mainstream with working libraries in all the popular languages. As you can guess from the title, it's called "parser combinators".

In the spirit of our previous blogs, let's solve some practical task. Consider you have to write an interactive TODO application, the pinnacle of practicality. It specifies the following commands:

Let's first define how will we represent parsed data, omitting the boring bits:

Now let's use the nom library to enjoy expressive and declarative parsing. It has or used to have macro API and function API. Since in v5 of the library macro API was very glitchy, we shall use function API, which we have tested with v6.

We will be parsing the commands line by line. Begin with declaring the top-level parse for a line and meet your first parser combinator: alt.

In (A) is declared that our function command is a parser. IResult captures parsed type (in our case, str&) and output data structure (in our case, Entry).

In (B) we combine three parsers: add, done, and search with nom::branch::alt combinator. It attempts to apply each of these parsers starting from the leftmost until one succeeds.

Now, let's have a look at the simplest parser out of the three:

The first combinator we see straight away is preceded. It forgets parse (B) and keeps only the output of (C). (B) still will consume input, however! Generally speaking, it combines two computations into a composition that runs both of them, returning what the second one returns. It is not the same as just running them in a sequence because here we build up a computation, but we will run it later on!

Interestingly, if we were writing Haskell we wouldn't find "preceded" combinator in our parser library. The reason is that what we described in the previous paragraph is called "right applicative arrow", or, as was coined during Ben Clifford's wonderful talk "right sparrow":

The other two combinators are pretty self-explanatory. pair combines parsers into a sequence, with the ws parser being a parser that consumes single whitespace. Here is a naive definition of ws: one_of(" \t"). many1 repeats a digit1 parse at least one time to succeed. digit1 is implemented in nom itself.

Now let's solidify the understanding of how to make sure that our parsers can be used by others.

We have already discussed that to achieve that, we need to return IResult. Now it's time to remember that it's still a "Result" type, so its constructors are still Err and Ok:

The shape of Ok value for IResult<in, out> is Ok((rest: in, value: out)). Here rest is the remaining input to be parsed, and value is the output result of the parser. You can see that preceded parse in (A) followed the very same pattern.

Here are more advanced parsers, that should solidify your intuition about how to use parser combinators in anger:

Parsing with combinators is so self-descriptive, it's hard to find things that need to be clarified, but here are a couple of highlights:

This should be enough guidance for you to start getting comfortable with this amazing combinator-based parsing methodology. Here are some parting thoughts:

If parsing is not your product or the main purpose of your library, odds are, parser combinators shall be sufficiently expressive and sufficiently performant for your tasks. We hope you liked this post and happy parsing!

If you have any questions, you can reach out to Jonn and Pola directly. Start the conversation in the comments of the mirrors of this article on Dev.to and Medium.